Kelly had no idea Michael was a recording artist but he said the NFL teamed up with different musicians to make a few different albums back when he was still playing. One of the albums he was featured on was a country album where Michael sang a country song with Randy Travis and on another album, NFL Jams, he had the chance to do a rap song. 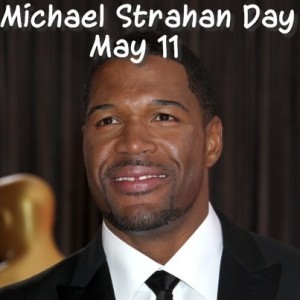 I bet Michael has a pretty good singing face.

Also, has anyone every heard of these albums? I had no idea the NFL did this.

Who Is the Perfect TV Mother?

Michael found a new poll the other day which rates the top three TV mothers. Do you have any guess as to who they could be? Kelly thought it might be Carol Brady in the number one spot and she hoped Florida from Good Times was on the list.

Mother’s Day is coming up this weekend and Kelly and Michael found some great deals for people who had yet to make a dinner reservation.

They found a special at Hooter’s saying all mothers who come in on Mother’s Day will eat free. If you aren’t a fan of wings, you could also take your mother to Medieval Times for a free dinner as well. They will be sure to treat her like a queen.

“Nothing like eating with horses running around,” Michael said.

Michael Strahan is heading to Houston on May 11 2013 to be awarded an honorary doctorate from his alma mater, Texas Southern University. The city of Houston is also naming May 11 Michael Strahan Day in the city.

“I know I can’t get arrested in Houston May 11 so you know where I’ll be partying,” Michael joked.