Michael Strahan received his honorary doctorate from Texas Southern University this past weekend so it looks like the show is going to need to change the name to Live! with Kelly and Dr. Michael Anthony Strahan.

Michael showed off the medal/necklace they gave him at the ceremony but he said he didn’t really like wearing it because he felt like a rapper. Kelly was glad to take it off his hands for a little so she could wear it. 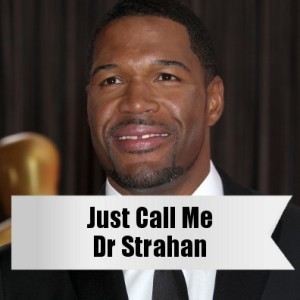 He shared a few pictures from the ceremony with the audience, the best one being a picture of him sitting next to George Foreman (one of his sons graduated that day as well but Michael didn’t know which since they are all named George) and George was so happy to be in the photo it looked like he wanted to eat Michael.

May 11 was also named Michael Strahan Day in Houston, Texas, and Michael made sure to show off his plaque that said it was all true. While in Houston for his special day, he said he was tempted to just do as many illegal things as he could because no one could arrest him on his own day.

This weekend also saw more good news for the Strahan family when Michael’s niece Tiffany and her husband, Rubin, gave birth to their first child, Ryland.

Michael Strahan – There Are Three Kinds Of People

Obviously, Michael’s mom threw a big party for his doctorate and a lot of people came over  to his house.

“If you say free food, people come from all over,” Michael said.

From what he said on Live!, it seems like all three types of people came to the party. Michael explained there are three types of people who go to a party with free food. The first kind comes, eats and leaves. The next type comes, eats some food and takes a plate with them when they leave. The third, most annoying kind, is the kind of person who shows up, makes a plate to go, makes another plate to eat right away and then leaves.

As much as Michael thought the third type of person was a bit annoying  Kelly said whenever she has people she can never get an accurate head count so she ends up making food for 800 people and loves it when people take her food home because she doesn’t have enough room in her house for all of it.

Also, the cake thief was at the dinner and she tried to steal the cake again.