Best Way To Get Girls? Hold a Guitar

Do you remember the guy Michael Strahan was talking about a few weeks ago who was puncturing the tires on women’s cars in grocery store parking lots and then when the women came out, he would offer to help them with the tire? While the method worked, he did get caught in the act. According to one study, he should have just bought a guitar. 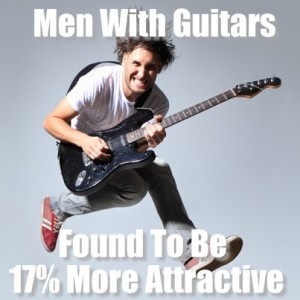 Kelly Ripa & Michael Strahan have been named in the top 100 most trusted people in America and a French dating study revealed how to be 17% more attractive.

The lesson from all this? Ask the guy to play the guitar before you go on the date. He might have read the same study.

Kelly and Michael got a special honor from Reader’s Digest today. They were named in the top 100 most trusted people in America, a poll that was voted on by over 1,000 Americans. Some of the names near the top of the list included Tom Hanks, Meryl Streep, Bill Gates, Alex Trebek and Julia Roberts. Kelly landed at 73 and Michael landed at number 91.

Forbes had a recent poll of the most influential athletes in America but it made Kelly a bit mad. Read the list below and guess why.

Do you know why Kelly was a little upset with the list? She pointed out that there were no women on the list. While that did bother Michael, he said the strangest part was Tim Tebow being in the number one spot even though he doesn’t have a team to play for and he didn’t even play a single game last season.

Kelly and Michael played another round of Soar into Summer Trivia and Wendy Romagnoli was the lucky person to call in. She was glad she had a chance to win a vacation too. She had just arrived home from the hospital this morning after doctors thought her daughter was having an appendicitis. Luckily, she did not, but Wendy said the pain has yet to subside.

Good thing for her, she answered the trivia question correctly and won a vacation to Tanque Verde Ranch in Tucson, Arizona.

See if you can get the question correct:

When talking with Psy earlier this week, he revealed the origin of his name. What is it short for? – Psycho.