Kelly and Michael have already talked about the cicadas who will be taking over New York City this summer. While most people would not see this as good news, one chef in New Haven, Connecticut is going to be using the cicadas to add to his restaurant’s menu. The chef is even taking it one step further saying he would never deep fry the bugs but instead is planning on boiling them with some spices and then serving them to his customers.

You can visit the restaurant, called Miya’s Sushi, although the cicadas won’t be on the menu until the summer. Until then you try their famous mealworm and cricket-filled fried rice. 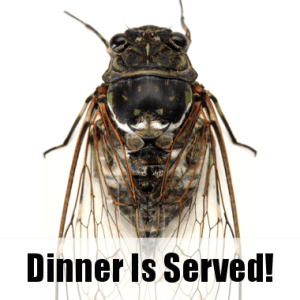 Cicadas are about to invade NYC and one New Haven chef is letting them invade his menu as well. Also, a topless Golden Girls portrait sold for $1.9 million.

Are you a trekkie? Are you single? Then you might want to head over to the Star Trek dating website TrekPassions.com to meet your one true match. If you are not convinced this is the website for you then their slogan might reel you in: “Set phasers to stun and if that doesn’t work set it to stunning.”

Michael said he is about to start his own dating website called GapToothLovers.com with the slogan, “Mind the gap.”

A topless picture of Golden Girl Beatrice Arthur recently sold for $1.9 million at an auction house. The painting, which was not commissioned by Arthur or authorized by her, was painted by artist John Currin.

It was time for another round of Soar into Summer Travel Trivia and this time the lucky fan who had a chance to win a trip to the La Playa Beach Club in Florida was Doris McBrier. The retired woman said her favorite parts about being retired are reading a bunch of good books, gardening and playing with her grandchildren.

Anyways, McBrier won the trip by answering the following question correctly. Can you guess the right answer?