Soap Opera Fans: One Life To Live & All My Children Return Online

One Life to Live and All My Children are coming back on Hulu and iTunes. 17 members of the former casts will put out four new episodes a week. Many special guest stars are also expected to come to the online series.

Kelly Ripa: Returning To All My Children Online Series? 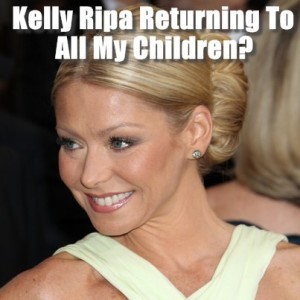 Kelly Ripa hinted that she would love to return to All My Children’s online series. Michael Buble broke into song on a subway in New York City. (image credit: Helga Esteb, Shutterstock.com)

Kelly Ripa and Michael Strahan have thrown their hats in the ring for guest spots. Kelly could play herself and Michael wants to play her body guard. Kelly said that would never work because she was a private eye on the show and she could be her own bodyguard. She was a runaway teen alcoholic before that.

Kelly’s full name on All My Children was Hayley Vaughan Cortlandt McIntyre Santos Santos Santos. She said the first two marriages to Santos were illegal because he was already married.

Michael Strahan was so excited to duet with Michael Buble on April 25. Kelly was waved in to do some dancing, but she said she dances like a Peanuts character on a Christmas special. After the show, Buble went to the subway and broke into song on a train.

“This is why New York City is incredible,” Kelly said. “You never know when Buble is going to break loose in the subway system.”

When Is Michael Buble’s Baby Due?

Kelly said that Shanita is a big party planner. She specializes in weddings and baby showers. She said she has had major success in her occupation. Shanita played for the Windjammer Landing Villa Beach Resort, a prize valued at $7,800.

“In what month did Michael Buble say his baby is due?”

Shanita knew right away that it was August because that is when her birthday is. She said she is going to take her mom with her on the trip.