Kelly Ripa is a spokesmodel for Electrolux. She recently went out to Columbus Circle in New York City and made cold drinks for passerbys, using the new French Door Refrigerator from Electrolux. The brand is also donating $125,000 to Ovarian Cancer Research. 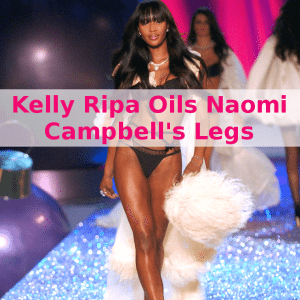 Kelly Ripa made drinks for fans of the Electrolux French Door fridge and told the story of when she oiled Naomi Campbell’s legs in Jay Z’s music video. (Anton Oparin / Shutterstock.com)

Kelly was making the drinks inside of a giant plastic bubble on top of the Subway line. Every time she went to give an interview, she said she got a little help shaking the drinks from the trains. The drinks were all non-alcoholic and Kelly had to battle with the air conditioner the entire night. Every time they unzipped the cooling unit, the bubble would start to deflate.

Michael Strahan read a study that said that singing a song, like “Happy Birthday,” before you enjoy your dessert will increase the enjoyment of the treat. Probably because it puts a happiness and celebratory mood to the occasion, but Strahan said he is going to try this from now on. Should you see Michael Strahan sitting in a restaurant, singing to his dessert, just accept it!

Kelly Ripa Was In a Jay Z Video

Kelly said that she would sing “Twerk It, Miley” while she eats her cake. She loves when Miley twerks, but the song is actually called “Somewhere in America” by Jay Z. Kelly Ripa was in a Jay Z video and her children, and the rest of the world, don’t believe it.

Kelly and Mark were in a Jay Z video, playing themselves watching a fashion show. She said that the staff had her convinced she was being punked. She showed up the video shoot and was very nonreactive and aloof, assuming that Ashton Kutcher was going to show up any moment. She was aloof with Jay Z and then introduced to Naomi Campbell, who called her “delightful.”

Kelly said she figured if she was being punked, she was going for this moment. In an act of strange desperation, Kelly Ripa caressed Naomi Campbell‘s legs as they were being oiled for the runway scene. From top to bottom, Kelly Ripa ran her hands down the model’s legs.

“I became a member of the leg oiling team,” Kelly laughed. “I think she thought I was crazy.”

Ashton Kutcher never showed up. Jay Z was very gracious and Kelly finally realized, once it was over, that the shoot was real. And she had massaged Naomi Campbell’s legs.