Kelly Ripa: “Being a Teenager is Hard”

Kelly Ripa said it is exam preparation time in her home and she told Michael Strahan she is excited she isn’t a kid anymore but she still had to make her kids think her life is harder. She said she was looking at the graphs and charts sitting on his kid’s table, thinking how hard these tests must be, but she still had to tell her kids being an adult is way harder.

“I didn’t want him to know the reality that being a teenager is harder than being an adult,” said Kelly. 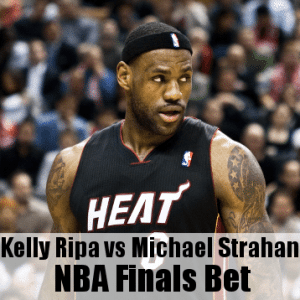 Michael Strahan tried to get Kelly Ripa to bet on the NBA Finals game between the Miami Heat and the San Antonio Spurs.
(Domenic Gareri / Shutterstock.com)

The Miami Heat beat the Indiana Pacers last night , meaning they are heading to the NBA finals to face off against the San Antonio Spurs.

Jason Kidd announced his retirement from the the NBA the other day. Michael said he called the 19-year veteran of the sport and told him he needs to get his golf game up.

“So, it’s like a new way to be competitive without pulling your disc,” said Kelly not realizing you can’t pull a disc. When everyone started to laugh at her she finally understood and said her parents do the same the thing all the time.

She remembered a time when they were telling Kelly not to do drugs but they knew nothing about drugs so they told her to make sure no one slips pot into her drink when she is at school.

Deacon Jones Passes Away at 74

One of Michael’s football mentors, Deacon Jones, the inventor of the term “sack,” passed away at the age of 74. Michael said he will always remember Jones being there for him all the time.

As for coining the term sack, Michael Strahan said Jones loved talking so much it probably just came out. He remembered a time when he called Jones to be the presenter for an award he was getting and Jones ended up having a speech that was two to three times longer than Michael’s acceptance speech.