Kelly & Michael discussed a woman trained in Ontario, Canada, to run a half marathon before working her way up to a full marathon. But when she missed a turn on the route, she accidentally ended up running a full marathon and winning the race! How does that happen? 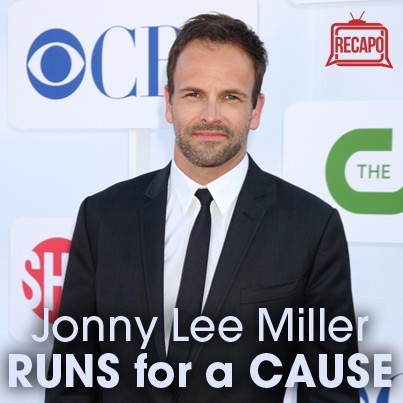 Michael Strahan wondered why she didn’t figure out that she had run more than half her intended distance. Elementary star Jonny Lee Miller, who has talked about his love of running on Live!, ran a 50-mile marathon to raise money to find a cure for Sanfilippo Syndrome, which affects the child of someone he works with on the show. He is trying to raise $160,000 by running various races. You can donate to his cause at crowdrise.com/jonnyleemiller.

Sanfilippo Syndrome is a serious but rare cellular genetic disorder in children that can be terminal.

The co-hosts also remembered Dean Karnazes, who ran 50 miles per day across the country for 75 days. Kelly said she struggled to finish a 10K with her son, but Karnazes has a harder time not running.

Since retiring from professional sports, Strahan said that he only does the exercises he likes to do, and running is not among them. He has told his trainer he refuses to even jog. “That’s just mentally too much for me,” he said. “I can’t handle anything that makes my leg move outside of a walking pace.”

According to news reports, humpback whales have been seen off Atlantic Beach on Long Island. The video seen on Live! was very impressive. Strahan said that he can’t believe the surfers who took the video stayed so calm.

Kelly said she can tell when a predator is around because fish start skittering or jumping. Michael Gelman said that there is almost no risk of a human being swallowed by a whale.

Kelly & Michael: Phone Use on Vacation

Michael Strahan said that many spouses argue with one another about phone use on vacation. About 55% of people are overly connected to their work during vacations.

Ripa agreed that Strahan is addicted to his phone. He went to lunch with friends and family yesterday, but he could not stay off his phone. His fiancee sent him a text message from across the table to tell him to put his phone away!

Kelly said that she has talked with Nicole about how much time he spends working on his phone, even when he is not working.

It’s been an unsuccessful week for trivia contestants on Live! Would Thursday be the day the co-hosts broke the streak and got someone to answer the phone? Sadly, the co-hosts once again got an answering machine.

Melissa and an audience member at least received a consolation prize of a $500 gift certificate to Cooking.com for kitchenware.