Kelly Ripa was still on vacation, but Extra host Maria Menounos filled in on Live! with Kelly and Michael. She caught up with Michael Strahan about her recent birthday bash, which included 800 of her closest friends and family. She said it’s the one day of the year that she gets to let loose and Michael Strahan always misses her birthday. 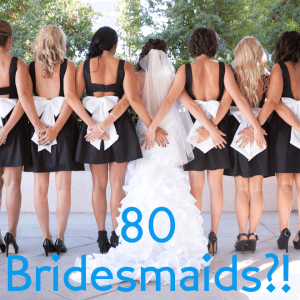 A bride in England got married and had 80 of her closest friends in her bridal party. Would you send your remains into space with Elysium Space Burial?

Menounos has been dating her boyfriend for 15 years now, meaning they are common law married twice over. She said she doesn’t feel the need to get married, but he dad keeps bugging her about it. Making headlines, a woman in England had 80 bridesmaids. She was the head of a dancing school and all of her dancers wanted in on the festivities. Menounos said she would get married if she could have 80 bridesmaids.

E.L. James, the author of 50 Shades of Grey, is at the top of Forbes’ Best-Selling Authors. She made $95 million in 2013. Michael Strahan said he should get into the game with 51 Shades of Chocolate. Would you read a Michael Strahan romance novel?

A normal burial can cost around $6,000, said Michael Strahan. But a new burial method is going to save you money. It’s only $2,000 to send your cremated remains into space. What? They weren’t sure if that means pouring your ashes into space or what, but there is the worry that you might end up in a space toilet. Elysium, the same name as the Matt Damon action flick, is the company doing these space, after-death trips.

Would you send your remains into space? I think I’ll pass on that one. If I’m going to space, I want to be alive for it.

What Makes Men Do Housework?

Michael Strahan said that he does “selective housework.” He said he’ll just throw his dishes in the sink and wait for a dish fairy to come and clean them. A new study shows that married men that are in a female-dominated field of work are more likely to do housework. Kelly & Michael guest co-host Maria Menounos said that her writer boyfriend has been her dish fairy. For Strahan, he wondered if it had to do with sensitive lines of work.

Growing up, Michael Strahan said his family made him do chores when he got in trouble, which was a lot. He said the only thing he really enjoys is riding his lawn mower.

Carrie Underwood Starring In NBC’s The Sound of Music

Hillary Bock-Finley from Florida played for Tradewinds Island Resort in St Petes. She correctly answered this question about Carrie Underwood.

In what musical in New York City is Carrie Underwood appearing in this fall? Answer: The Sound of Music