Selena Gomez had a fresh birthday glow about her. She celebrated her 21st birthday on July 22 and hasn’t let the party stop all week. Gomez’s fourth album, Stars Dance, is currently number one and released this week as well. Selena celebrated her birthday, which is actually a track on her new album, with a gypsy themed party, photo booth and some shots. Heck, she’s 21! Let the party begin! Gomez was very excited to get carded for the first time. 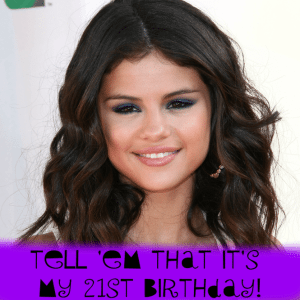 Selena Gomez turned 21 with a gypsy themed bash and shots. She performed her newest single, “Slow Down,” from her Stars Dance album, available now. (s_bukley / Shutterstock.com)

Selena’s mother and her stepfather welcomed their first child together in June, Gracie. Selena said this is her first sibling and she’s healthy and happy. Her mother and stepfather had been trying to have a baby for a while.

Since turning 21 Selena has decided that it’s probably time to move out of her parents’ home. She said it’s sad to think about, but they’re probably tired of her eating all of the food. Gomez wants a big kitchen because that’s always where her friends are hanging out. She wants to be able to dance in the kitchen and would love to have a pool in the backyard, but the kitchen is number one on the list.

But let’s remember, she’s only been 21 for as long as the Royal Baby has been in the world. It’s going to take some time to get used to her new, adult life.

While “Slow Down” isn’t my favorite song on Selena Gomez’s album, it is a fun song. In terms of Selena’s hits, it’s right up there with “Love You Like a Love Song,” but no where near as twerk-worthy as “Birthday,” the first track on the album. “Slow Down” is a fun song that will definitely be making top tens in the coming weeks.