Country trio Lady Antebellum has come a long way in just five years. They formed in 2006 in Nashville, and hit it big in 2010 with hits like “Need You Now” and “I Run To You.”

In 2011, they won five Grammy Awards for their music. They were recently nominated for Best Country Album for We Own The Night in the 2012 Grammy Awards. 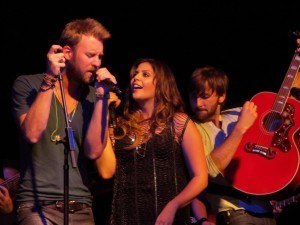 They performed the holiday hit “Blue Christmas,” originally made famous by Elvis Presley. The song has been recorded by many artists in the decades since, and Lady Antebellum included it on a special Christmas album they released in 2010.

Lady Antebellum is made up of Dave Haywood, Hillary Scott, and Charles Kelley.

You can find their recording of “Blue Christmas” on a limited edition holiday album. Click here to purchase it.

Mark Consuelos and Kelly Ripa, dressed as a prince and princess, presented a performance by the newest production of “Disney On Ice: Dare To Dream.”

This show features characters from Disney films like Tangled, The Princess and the Frog, Cinderella and more. It is currently touring the United States. Performance dates and ticket information can be found at disneyonice.com.

Today’s clue for Live’s Aloha Hawaii Watch To Win Giveaway is “Kayak.” Each weekday, the show will feature a clue. Viewers can use the clue to enter online to win a trip to the Disney Aulani resort.

The show is giving away five trips for four. The prize is a six-night stay at the resort, and it includes round-trip airfare and $750 spending money. The total prize is valued at over $8,500.

Mark Consuelos returns as co-host for the December 20 “Home for the Holidays” special episode. Guests include Scarlett Johansson, the Radio City Rockettes, a performance by Voca People, and Mark & Kelly’s son Joaquin will ask kids what they want for Christmas.