In 2011, the band Hot Chelle Raewon an American Music Award for the Best New Artist Category. 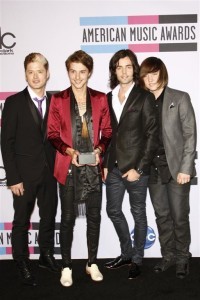 Their hit song, “I Like It Like That” premiered on September 13th, 2011 and is steadily moving up the charts. The song features rap duo, New Boyz and was released on iTunes on October 4, 2011. The video for the single was released October 7, 2011, which was the same time the band was dropped from their record label (Jive Records) and picked up by RCA Records. Hot Chelle Rae’s latest album was released on November 29, 2011, so hurry and pick yours up today!

On Live!With Kelly, the band thanked their fans for their AMA award and announced on the show that they will be performing in Times Square for Dick Clark’s New Year’s Eve special. For other tour dates and background information, check out their website at http://www.hotchellerae.com/us/music/whatever. This site also contains appearance schedule, so if you’re near a town where the band will be appearing, they encourage you to stop by.

Check out their videos at http://www.hotchellerae.com/us/music/whatever Does your daughter have their CD? Do YOU have their CD? Leave a comment and let me know what you think. Is it worth the money or no?

Trivia on Hot Chelle Rae: Did you know that guitarist, Nash Overstreet’s brother is Chord Overstreet from the Fox hit series “Glee”?