Seth MacFarlane came by Live! With Kelly & Michael to sit down and talk with Kelly Ripa and Michael Strahan and to perform a holiday song. He’s always really funny, so I was excited for his interview. But, I was also really excited for his performance. He seems like he has a great voice. He’s an actor, animator, writer, producer, singer, and songwriter. He can really do it all. His first holiday album Holiday For Swing! is available now. Kelly said there was something about his face that made her happy. He has a happy face. Kelly & Michael both popped breath mints when he came out. 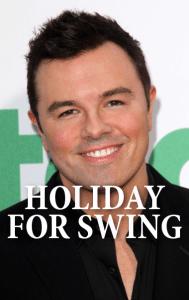 MacFarlane grew up in Connecticut. He said that he had a pretty typical Christmas growing up, but his parents were ex-hippies, so they were into some odd things. They wanted to use the same tree for Christmas over and over for about four years. They threw it over a fence and brought it back out over the years. It was dead, but they’d decorate it. They were lucky they didn’t have a fire from it. They thought others would follow along, but nobody did. Kelly’s dad had the same thing. He didn’t want to cut the tree, so he dug it up.

They just finished Ted 2, which is very exciting. Don’t bring your young children to see it. He thinks it’s better than the first one and will live up to the hype. They didn’t make the same movie twice. It’s a very different story, which is good. They have great characters from the first movie and he treated it like a TV series where they explored the next chapter in Ted’s life.

MacFarlane performed the song “Mele Kalikimaka” from his holiday album Holiday For Swing! He really does have an amazing and classic voice. It was a song about how Hawaii says Merry Christmas. It was a really fun performance. MacFarlane also had a great stage presence. And the stage was decked out with beautiful Christmas trees. It was a lot of fun. Kelly said he had too much talent for one person. He’ll also be performing with a symphony on New Year’s Eve.

Kelly & Michael: “(Everybody’s Waitin’ For) The Man With The Bag” Performance

MacFarlane then came back at the end of the show to perform “(Everybody’s Waitin’ For) The Man With The Bag,” and did an amazing job.