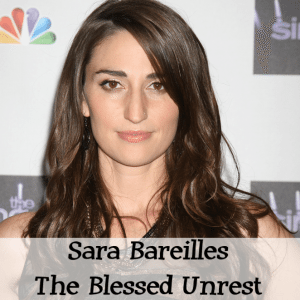 Sara Bareilles taught herself to play piano and her career has taken her to the top. She started a romantic music revolution with her song “Love Song” and is making waves with her new album The Blessed Unrest, available now. It’s currently the number one album on iTunes.

He song “Brave” is going to be one of those timeless hits. It’s about stepping out and giving the haters the finger. Bareilles calls the world to be brave and forget silence. Say what is on your mind and speak from your heart. Speak the truth and be strong. Michael Strahan said that Bareilles made him want to be brave.

Sara Bareilles’ style and attitude is completely effortless and stunning. She looked amazing in a striped sweater with oxford collar and shorts. Her long brown hair was set in waves. While some singers make singing look hard or painful, it’s like breathing to Sara Bareilles.

Another song from Bareilles’ The Blessed Unrest, “I Choose You” was dedicated to all of the gay couples that can now get married. It’s definitely a song that will be over played at weddings from now on. I’m not sure if I’d be mad to hear this song over played, though. It has a really great beat, it’s light and airy with really sweet lyrics.

Of these two songs, I have to say I like both but want to hear “I Choose You” get played more. “Brave” is upbeat and sure to be one that people will rock out to in the car, but “I Choose You” is one that makes you want to close your eyes and float on happy thoughts. Sounds cheesy, but take a listen. It’s really beautiful.