Jordan Knight and Nick Carter came by for a performance on Live! With Kelly & Michael, which I was very excited about. I had no idea that this was a thing. I was obsessed with Nick Carter’s the Backstreet Boys when I was a kid. Jordan Knight, of course, is from New Kids on the Block. I think it’s incredible that two people from the Backstreet Boys and New Kids on the Block teamed up. They teamed up and are now Nick & Knight. Kelly said that the “two boy band heartthrobs have collaborated for a debut CD together.” 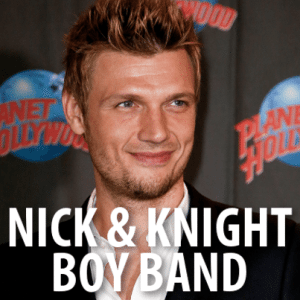 Nick Carter and Jordan Knight came by to perform their song “One More Time” as Nick & Knight on Kelly & Michael. (Debby Wong / Shutterstock.com)

Nick & Knight performed their song “One More Time” together. They even had the cool synchronized dance moves. And their outfits were kind of matching. The song was just so upbeat and happy. It was really hard not to smile throughout this performance. I was so into it. The song was just about how happy they can make someone and how nobody was going to make them feel the way they did. So they wanted it one more time. It was so good. They looked like they were so happy and were having so much fun performing. It was just such a good, happy performance.

Kelly called it great and Michael called it awesome. Kelly said it was a great performance. Then they showed a picture of the Backstreet Boys and New Kids on the Block and the audience obviously went nuts.

They’re kicking off their tour together on September 15 2014 in Nashville, which is very exciting. It’s a 39 city tour and they’ll be doing all the songs on their album as well as some Backstreet Boys and New Kids on the Block songs. Kelly asked how this is different. It’s just the two of them and the focus is on them, but they’re entertainers.

Michael asked if New Kids on the Block and the Backstreet Boys will ever go back on tour and they said, “I don’t see why not.” They’ll have to perform their bands’ stuff and their own stuff then. “If they want it we’ll give it to them,” Nick said.

Kelly & Michael: Where to Live

Nick recently got married. Kelly mentioned how they had talked about where they want to live and how they don’t like winter anymore, so she asked him where he’s going to live. He said he doesn’t know yet. He has a vacation house in Key West, which he loves. Jordan loves Boston. He asks himself why he lives there every winter, but then spring comes. Boston makes Michael nervous though. They ended the show by all dancing together.