A couple years ago, Karmin broke into the music scene with their smash hit song “Brokenhearted.” They also have over 200 million YouTube views. Now the pop pair is back with their latest single, “I Want It All.”

Kelly and Michael: Karmin “I Want It All” Review 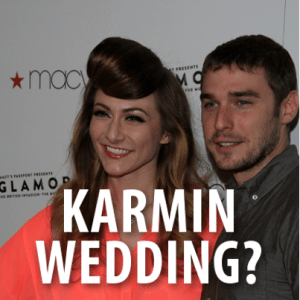 Pop duo Karmin (Amy Heidemann and Nick Noonan) performed their new single, “I Want It All,” for Kelly and Michael, who offered to perform at their wedding. (Helga Esteb / Shutterstock.com)

Karmin is Amy Heidemann and Nick Noonan. Together with their backup band, they took over the Live stage, belting out their latest song about love and desire. Do you think of Karmin as a duo, or does it seem like Amy’s presence breaks away from everything else around her? I think part of it is the hair, but it certainly seems like the duo is off-balance.

Amy wore red, Nick wore a floral pattern, and the backup band was dressed in solid white, which really stood out without distracting from the leads. Nick also supported Amy’s vocals with some trombone playing.

These two are just quirky enough to make it work, and Kelly and Michael greeted them after their performance with warm reviews of their song.

Amy and Nick are engaged to one another, and that has been going on for the past three years. They agreed that they are going to get married, but it hasn’t happened yet. Kelly and Michael volunteered to perform at the couple’s wedding.

You can download the new single, “I Want It All,” which is available now.

The deadline to enter Live’s Search for Unstoppable Moms is February 7, so don’t wait. Submit your information on Kelly & Michael’s website if you have a mom you think deserves to be honored.

Thousands of entries have already been received, and among them are Kara from Iowa, a nurse nominated by the mother of a former patient, who has four children, two of whom she adopted from Rwanda.

Who is the most unstoppable mom you know?