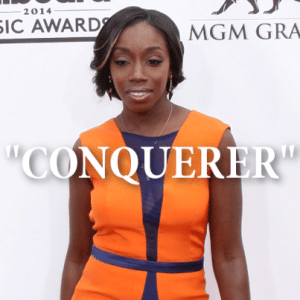 Estelle came by Live! With Kelly & Michael for a performance. I don’t know too much about her, but she seems like she’s really cool and has her own unique style from her website. She’s obviously also very talented and I was really excited to learn more about her. I had a feeling it was going to be a great performance. Before they introduced her, Kelly & Michael showed some of her music video.

It was a fun, energetic song and a black-and-white video. I really liked it. It seemed really artistic and creative. I think I might have heard it before. She’s one of those people that you know when you hear her, I guess. Kelly & Michael said that they were dancing throughout the clip of the music video and they couldn’t stop. I don’t blame them. She’s clearly really easy to get into and dance to.

Estelle’s is actually a Grammy-winning artist. I had no idea, but it’s easy to see why. She’s insanely talented. And her new CD True Romance will drop on February 17. I think I might check it out. She just has a really great sound and vibe to her, and her songs have great messages to them.

Estelle performed her brand new hit “Conqueror.” I feel like I have heard this song actually. It was a really beautiful song. It was really simple at the beginning and then got bigger, but it was really pretty and it was pretty emotional. It was all about how you have to get back up when you fall down. Estelle has an amazing voice, and I thought this song had a really beautiful message. It was all about how we all make mistakes but we have to get back up and we can’t give up. People can’t tell her no because she’s a conqueror. It obviously meant a lot to her. She also had a guy playing guitar behind her, which was a nice touch. I really liked this performance and it was so easy to see how talented she is. Kelly said that she was so good.