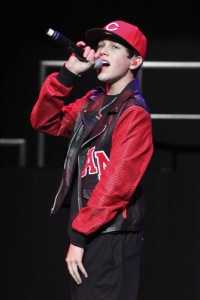 There were lots of screaming young girls on Live! with Kelly & Michael today. And sorry, Michael Strahan; they weren’t there for you! They were there to see Austin Mahone, a name that you probably don’t know right now, but will very soon.

Austin is just sixteen years old and began building his career through the use of the internet. Just like another young male singer, Justin Bieber, Austin developed a following when he began posting videos of his performances on YouTube. After becoming a YouTube sensation, Austin has a legion of devoted young fans that lovingly refer to themselves as “Mahomies.”

Now, Austin is getting ready to embark on a fully-fledged career in music. He is releasing a debut studio album, Say Somethin, in November 2012. Austin joined Kelly & Michael to perform the album’s title track, “Say Somethin,” for all his “Mahomies” in the audience! It looks like Austin could be the next teen pop heartthrob.

After his performance, Austin chatted with the hosts about his beginnings in music. The first, original YouTube video he posted now has over eight-six million hits! He is originally from San Antonio, Texas, but now lives in Miami.

Austin’s biggest purchase to date is a Range Rover, even though, he doesn’t even have a license! He just has a learner’s permit. Kelly was touched when Austin said that before he bought his own car, his first big purchase was a dream car for his mom.

Austin decided to get down with Kelly & Michael and teach them some of his dance moves. Kelly had a tough time (maybe it was the heels). But Michael had the moves down pat!

Say Somethin will be released in November, and Austin promised to return for another performance on Live.