Country pop duo Florida Georgia Line came by to perform on Live! With Kelly & Michael. They first played part of the music video for their song “Cruise.” It was just a fun, country music video. The two men were singing and playing their music and a woman was walking into a car. It seemed like it was a happy, carefree song. Michael said that Florida Georgia Line is country music’s hottest duo, and I can see why. There’s something about them that draws you in even if you’re not a country music fan. Their new single “Dirt” is available now.

Florida Georgia Line played their number one hit “Dirt.” The two had a band with them. They both played instruments and sang too. This song was actually a lot slower and mellower than the other songs I had checked out when I was looking into them when I heard they would be on Live! With Kelly & Michael, but it still had a good energy.

They’re just a very country band. They really stick with the genre, but they’re very good within the genre. They also definitely know how to work the camera and the audience. The song was about how things are so good that it hurts and how it makes them want a house with a white picket fence on the dirt. It’s a very hopeful song, and they were very talented. It was a great performance. Kelly & Michael came up to talk to Florida Georgia Line after their performance, and Kelly said that their performance was gorgeous. It really was. It was a great song. 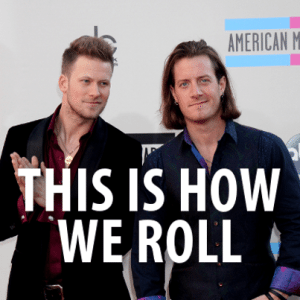 Florida Georgia Line performed “Dirt” and “This is How we Roll” and talked to Kelly & Michael about their DIrt Campaign with Habitat for Humanity. (Helga Esteb / Shutterstock.com)

Florida Georgia Line got their name because Brian Kelly is from Florida and Tyler Hubbard is from Georgia. They had it on their guitar straps, and they pointed it out to Kelly. She asked if Florida or Georgia is better. They said that together is the best.

Florida Georgia Line is working on a new CD that’s coming out in October. “Dirt” is their first single. It’s a song that they just had to do now. It feels like country music and feels like them. Brain Kelly said that they’re so humbled by their success that they wanted to give back, so they’re starting a Dirt Campaign and are partnering up with Habitat for Humanity. That’s amazing.

They met in college in 2009 and have been performing ever since. Kelly was standing between them and moved because she said she felt like she was in the band. They said it was fine and they could be a trio. They’re also a part of the GMA concert series and will be performing on August 15 2014. Michael also commented that he loved how they made love to the camera with their eyes when they finished. Brian Kelly did it again. Then Kelly & Michael did it.

Kelly & Michael: “This is How We Roll” Performance

Florida Georgia Line played another song as the show ended. They played “This is How We Roll.” It was a much more high energy and fast paced song and they asked the audience if they were ready to have a party with them. It was just a fun song. They only sang instead of playing instruments so they danced around too.