Academy Award nominee Salma Hayek Pinault (when did she add a bonus last name?) enthusiastically high-fived the studio audience as she bounded onstage in a stylish and apparently comfortable Bottega Veneta jumpsuit. She crossed her legs in the chair in a meditative pose for her interview about Grown Ups 2.

Kelly Ripa admired Salma’s narrow waist, but she explained her beauty secret: shoulder pads. They make your shoulders look wider, which can create the illusion of a slimmer waist. Michael Strahan pointed out that it works for football players. 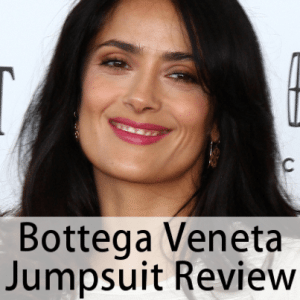 Everyone is talking about the Bottega Veneta jumpsuit Salma Hayek Pinault wore for Kelly and Michael! (Helga Esteb / Shutterstock.com)

For Bow Wow Week, Salma Hayek Pinault talked about her family of eight dogs. In the past year, her dog Angie passed away, and Salma was still emotional recalling her beloved pet.

Her role call of current animals included Lupe (a Mexican stray), Diva from the Mexican mountains, rescue dog Blue, Gucci, Tosca, Mozart, Charlotte (“who is the devil”) and Lolita, who loves to cuddle. That is a lot of dogs! How does she keep up with all of them?

“I have a thing with the dogs,” she said. “They always come to me.” She seems like she cannot say no to adding more to her pack.

Salma reprises her role as Adam Sandler’s character’s wife in the sequel Grown Ups 2. She also appeared as the wife of Kevin James in another film, Here Comes The Boom. James is part of the Grown Ups 2 cast as well.

Who is the best kisser she has worked with: Adam, Kevin, or Michael Strahan? Salma said she has only kissed one of the three men, because she and Adam never kiss in the movies.

She said she is grateful that she has never kissed Adam, and has only kissed Kevin one time. She thinks it is weird to kiss people that she is such good friends with, because she thinks about their wives, and all their children play together.

Salma has been friends with Shaquille O’Neal for a long time, but her husband met him only recently. Shaq was dating a woman who was shorter than Salma the first time he met her husband.

Shaq said he was afraid of his girlfriend, who was stronger than him and even picked him up! She and Kelly tried to recreate this scenario with Michael standing in for Shaq.

In a scene from Grown Ups 2, Adam’s character explains to Salma’s character why he does not want to have another child. His excuse is that adding another family member will require them to buy more pizza.

You can watch Salma and friends in Grown Ups 2, in theaters on Friday, July 12.