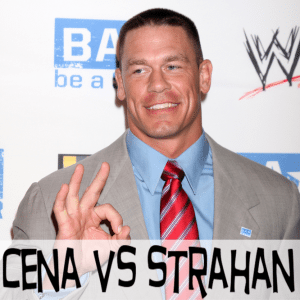 Michael Strahan challenged his rival John Cena to a sumo suit match. See how the NFL player matched up to the WWE champion. (Helga Esteb / Shutterstock.com)

Once upon a time, Michael Strahan said some harsh words against John Cena. Little to his knowledge, Cena walked out and challenged Strahan to defend his honor. Cena fulfilled his promise to kick butt today.

Cena and Strahan, separated by the tiny Kelly Ripa, decided to sit down and talk it out. Cena just returned from Tokyo, where he was working with WWE.

The life of a WWE star is not all fun and beating people up. It requires them to take part in over 300 events every year. Cena just finished filming a spot for Total Divas, the latest E! network reality show. It focuses on the lives of women in the WWE.

While the challenge was just a little fun to Michael Strahan, John Cena said he’s been preparing to go at it with Strahan his entire life. He said that he wrote a paper in fifth grade about how he would accept this challenge one day.

Looking like a pair of chickens in big fat sumo suits with their tiny legs sticking out, Michael Strahan, Kelly Ripa, and John Cena took to the mat. It was time for Cena and Strahan to Settle this score once and for all. Cena threatened to turn his face into a pastry and Strahan some how managed to take Cena down. They both ended up on the mat, unable to move.

Cena said he regretted challenging Strahan because he was a former NFL player and knew how to take a man down. Kelly wasn’t even needed in the fight, but she belly flopped on Cena at the end.