Newly engaged Matthew Morrison had a glow about him. The last time he visited, Kelly Ripa almost spoiled his big engagement by asking when it was going to happen. His now fiancee was backstage and he was scrambling to cover it up. They went to Elton John’s White Tie & Tiara Ball to debut the ring and their news. The couple actually got engaged in Maui, where they went on a horseback ride and walked on the beach at sunset. It was all perfect and in line. Morrison said he was really nervous. 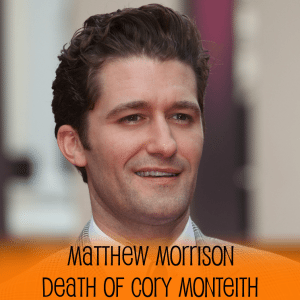 Matthew Morrison talked of his beachfront engagement with such joy & said the death of his friend Cory Monteith was a hard time that bonded the Glee cast. (Featureflash / Shutterstock.com)

They rode the horses down to a beach, where they shared a lovely, private moment. He got down on one knee and said all of the things he loved about her. Morrison waited until the last moment to take out the ring so she listened. He said she was unable to say yes because she couldn’t say yes.

At the White Tie & Tiara Ball, Chris Martin from Coldplay was the “house band” for the evening. He dedicated a song to them and he and Elton John said a duet of “Your Song.” Mind. Blown. Tears. Everywhere. The expectations are very high for the wedding.

“It has to be Elton John, or you’ve failed,” Kelly Ripa said. She offered her and Michael Strahan’s interpretive dancing skills as well.

Segueing into something not so great, Kelly Ripa offered her deepest condolences to Matthew Morrison on the death of his good friend and co-star, Cory Monteith. He said that the good thing about the situation is that they all came together as a Glee family for Lea Michele and Cory’s family. He remembered staying up until 5 a.m. talking to each and every cast member about what happened. They bonded together over an incredibly hard time.

Matthew Morrison did tear up a bit over his friend, but the best way to celebrate his friend is by singing an upbeat song.

I think I would take Matthew Morrison over Michael Buble any day. This isn’t because of their vocal differences, but because Matthew Morrison is just plain fantastic. He has the vocals down, so he jazzed it up with dancing. I think his skat needs a little work because it sounded a bit too methodical and perfectly pronounced. Other than that, perfection.

Matthew Morrison’s new album, Where It All Began, is now available.