Maybe Matt Damon wore black because he is in mourning? The incredibly talented Academy Award winning actor is leaving New York this week to live in Los Angeles. He and his wife are packing up the kids and moving across the country. He said that he lived in Los Angeles in some really crappy apartments once upon a time. Now, he and best bro Ben Affleck will be reunited in the same area. The pull was just too great. 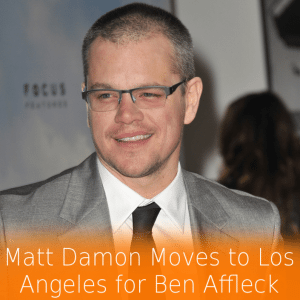 Ben Affleck and Jennifer Garner were actually a reason for the move. They have kids that are the same age that are friends and they want to be close to their friends, who are really family. The Damons will be living down the street from the Afflecks. Being so close will be good for babysitters, but Matt Damon said he’s “not going near” his pal’s kids. He has enough already and has to sleep at the bottom of the bed because the kids take over.

Speaking of family vacations, the Damons went on vacation recently. He tried surfing, but he’s pretty terrible with it. Near death experiences don’t stop him, so he keeps a buddy close at all times.

“It’s a really fun sport to be bad at,” Damon said. “Except when the surf gets really big and then you want to not be in the water and you can’t breathe.”

Matt Damon took another trip with his nephew, who Michael Strahan has taken a great interest in. They met when Damon’s nephew was 12 at a Super Bowl party and now he’s a freshman in college. He’s hoping to walk on to the University of Nebraska football team as a cornerback.

Matt Damon killed when he said that his new film is getting renamed Sharknado 2. That’s a great marketing idea to get viewers. But in all seriousness, Elysium looks fantastic.

Set in 2154, Elysium was directed by the same team that did District 9. It’s a sci-fi flick about Earth becoming a Third World Planet and all of the rich and famous take to a Eutopia Space Station, the Elysium. Damon said there is a social commentary in the film, but it’s not overpowering.

Elysium was shot in Vancouver and Mexico City, but the most chilling scene was filmed in the world’s second largest garbage dump. Damon said it was two weeks of filming and one location was nicknamed “Poo River.” He said that the gross factor was worth it in the end product. However, being in an area where the dust in the air is fecal matter, and everyone but Matt Damon was wearing a gas mask, doesn’t sound worth it to me. Though it does get me excited to see a project that Matt Damon worked so hard on.