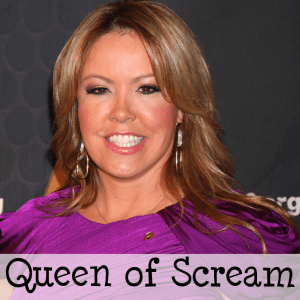 So You Think You Can Dance’s Mary Murphy is known as Queen of Scream for her high energy cheer. She talked about her dream of becoming a ballroom dancer. (Joe Seer / Shutterstock.com)

So You Think You Can Dance’s judge Mary Murphy shimmied on stage in a black and hot pink, color blocked dress. She said that growing up in Ohio, she never dreamed of being a dancer or judging people on their dancing.

Murphy is known for her outspoken and high energy judging on SYTYCD. She went to college and got a degree in physical education and was going to be a gym teacher. She has three brothers and they did everything together. They would fish, hunt, and do track together. Murphy said her small hometown was like Footloose.

“You might be arrested for doing the mambo!” she laughed.

Eventually, Mary’s first husband moved her to Washington, D.C. There she said dancing saved her life. She went to see the U.S. Ballroom Dancing Championships in New York. Within five minutes of walking into the Waldorf Astoria, Murphy said she wanted to be the U.S. Champion Ballroom Dancer. She said it was like being hit by lightning.

Ballroom dancing is an elegant art form, but Mary Murphy is known for her loud, in-your-face screaming on So You Think You Can Dance. The control and quiet of ballroom is obviously different when it’s a competition. Murphy said she didn’t even realize she was screaming and whooping on So You Think You Can Dance, because it was a normal reaction of support for the dancers.

Murphy taught Kelly Ripa and Michael Strahan some simple salsa dancing moves. They involved a cha-cha around Michael and a shimmy to the sides. She made it all look so easy and yet very clean and technical. Mary Murphy is one woman I want at my next party.