Zoe Saldana stopped by Live! May 16 2013 and she was looking more stunning than usual. She was wearing a black and white pantsuit that Michael described as looking “3D.” Kelly also made a comment about the time she saw Saldana on the red carpet at the Academy Awards and how she looked absolutely amazing.

“I have a village of people who put me together,” Saldana said.

Kelly said she has a village too but her village gets so exhausted putting her together in the morning that they all lay in the back of the studio with oxygen masks while the show airs. 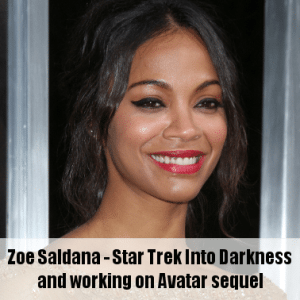 Zoe Saldana talked with Michael and Kelly about filming Star Trek Into Darkness, how she almost passed up the role and filming the Avatar sequels. (image credit: Helga Esteb / Shutterstock.com)

Zoe Saldana will be reprising her role as Neytiri in the next Avatar movie, which will be one of two planned sequels.

Saldana said the second time around shooting Avatar should be a bit less complicated than the first time. She said when they first started shooting the movie she had to get acquainted with the technology they were using and learn to act from her own imagination. She said after a month she finally learned how to use her imagination to help her act.

“I had a profound experience as an actor,” she said of acting in front of the green screen. “I realized I never want to grow up.”

If you watch any movie with Saldana in a starring role, you will notice one thing they all have in common. Saldana is always playing the role of a strong female character. She said she tries to choose parts where she will be playing a character that reflects the types of women she looks up to and reflects the personalities of the women that raised her.

Don’t expect to see her in any different type of role either. She said she could never play a damsel in a distress.

A few years ago, Saldana played the role of Cataleya in the movie Columbiana. While the name was not very popular before the movie, it has actually started to climb in popularity on baby name charts. Saldana said she was happy she could influence the rise of such a beautiful name.

Zoe Saldana will be reprising her role as Nyota Uhura in Star Trek into Darkness, which hits theaters May 17 2013. She said it was great to be back with everyone on set, saying they have all become friends as they have followed in the footsteps of previous actors from the Star Trek series.

Saldana said one of her favorite parts about the reprisal of the Star Trek series is watching the new fans who have never watched Star Trek before see the movie and walk away Star Trek fans.

Saldana almost passed up the role in Star Trek though. She said she was worried about becoming part of something so big, something so many people love. It was her Trekkie mother who convinced her to take the role. She kept telling her daughter it would be ridiculous not to take the role, adding that she gets to kiss Spock. Who wouldn’t want to do that?

I wonder if her mother is dating anyone? If not she could try out the Star Trek dating site.