On “Live With Kelly” July 23, Kelly Ripa and Mark Consuelos welcomed actor Vince Vaughn. In the time that Vince was last on the show, Vince got married and welcomed a baby daughter, Locklyn, who is now three months old. Mark wondered: Is she sleeping? Is he sleeping?

Vince said that he and his wife are now sleep training the baby, which he called a “difficult transition.” They do not go into her room at night when she cries, so that she learns to self-soothe. He said that in the long run it’s better, but it’s not easy as a parent to hear your baby cry. Mark and Kelly both said that they had difficulty sleep training their kids. Kelly would always go in when she wasn’t supposed to– and their kids still don’t sleep through the night! 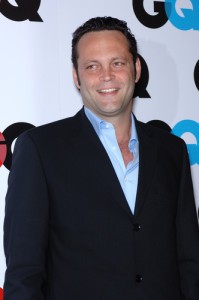 Right now, the baby is very into puppies, but Vince hasn’t bought a dog yet. He’s going to wait until she’s four or five, so she can remember and he can get the credit for giving it to her!

Lines from the Vince Vaughn Vault

Both Mark and Kelly are big fans of Vince Vaughn movies; especially his great movie one-liners. They attempted to stump Vince with his own lines during a game called “Lines from the Vince Vaughn Vault.”

Vince nailed lines such as “You’re so money and you don’t even know it” from Swingers and “I wanna polka” from Anchorman: The Legend of Ron Burgundy. He also remembered the classic line from The Break Up: “I can play it like Lionel Richie; all night long, baby!” Vince missed just one, getting seven correct.

Vince’s next film is the upcoming comedy, The Watch. Vince co-stars alongside Ben Stiller, who founds a neighborhood watch program and then discovers mysterious alien activity in his area. The films also stars Rosemarie DeWitt, Richard Ayoade, and Jonah Hill. Mark said that he recently saw Jonah Hill walking down the street, and he burst into laughter because Jonah is just so funny– even when he’s not being funny!

Vince agreed that Jonah is hilarious, and said that the cast had a great time improvising lines together. The film is directed by Akiva Schaffer, known for his “Saturday Night Live” Lonely Island digital sketches.

Kelly, Mark and Vince then watched a clip from The Watch, in which Vince introduces his buddies to his bratty 16-year-old daughter. Mark was very jealous of the man cave from the clip– you can’t get one like that in a New York apartment!