Neil Patrick Harris pointed out that everyone knows Jayma Mays from Glee, but she has been in a number of TV shows and movies, including Heroes and How I Met Your Mother. But she and Neil Patrick Harris didn’t really get to know each other back then.

When Jayma Mays appeared in Heroes, she had to learn to speak Japanese for her role. She recited one of her lines, but she couldn’t recall exactly what it meant. She said her very first role was a bit part in the sitcom Joey. 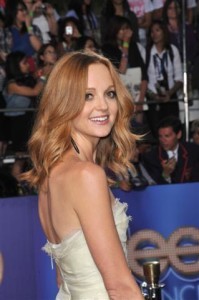 Jayma Mays, star of Glee, talked about her work with Neil Patrick Harris in the 2011 movie The Smurfs. (Credit: Featureflash / Shutterstock.com)

But Kelly Ripa shared a photo of Jayma Mays as a child, auditioning for a role in the musical Annie. She said her parents used to dress her up like Annie just for fun, even covering up her red hair with a red wig.

Jayma Mays’s family is proud that her career has worked out. They even offered to dress up as Smurfs for the movie premiere, but she talked them out of it.

Neil Patrick Harris said she was great in The Smurfs, playing his character’s pregnant wife.

Jayma Mays said her mom would force her to watch The Smurfs as a child, which is the opposite of my childhood experience. To rebel, she would tell her mother that Gargamel was her favorite.

They watched a clip from The Smurfs. After the clip, Kelly Ripa mentioned that the Smurfs were added in later. She asked if there was anything for the actors to look at when they were reciting dialogue to the animated characters.

“I felt like I was going crazy for the first few days,” Jayma Mays said. There were stickers marking where the Smurfs would appear later, and the actors wore earpieces to hear the Smurf dialogue in the exchange.