Heidi Klum & Neil Patrick Harris: How I Met Your Mother

Heidi Klum and Neil Patrick Harris reminisced by recalling her guest appearance on his sitcom, How I Met Your Mother. “We went to a Victoria’s Secret supermodel party,” he explained to Kelly Ripa, “and Barney had lost his mojo and was freaking out, running from supermodel to supermodel. And I think [Heidi] talked some sense into me.” 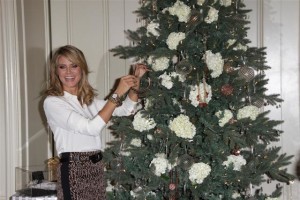 Kelly Ripa said Heidi Klum recently celebrated her wedding anniversary in May. The couple went to Florida and had a wedding masquerade party. The couple renews their vows every year.

“It’s nice to spend that time together and just be us as a family,” Heidi Klum explained. She is married to the musician Seal. Each year she ad libs new vows.

The couple, who married in 2005, have four kids and have recently added two German Shepherds. They previously had a small dog that didn’t get along well with their kids.

Heidi Klum and Seal’s family lives in Los Angeles, but they all moved to New York City for the seven weeks that Heidi Klum was shooting Project Runway. The children love the different energy of New York, which is much more frenetic than their California home.

Heidi Klum said this year’s Project Runway designers were awesome. They cut the number of contestants from 20 designers to 16 in the first episode. This led to Heidi Klum’s first clash with her fellow judges, Michael and Nina, fighting for a contestant in whom she saw potential. Anya had only recently learned to sew before trying out for the reality competition. They watched a clip of the contestant Heidi Klum mentioned.

Incidentally, as Regis Philbin would say, Anya went on to win her season of Project Runway, which aired last summer on Lifetime.