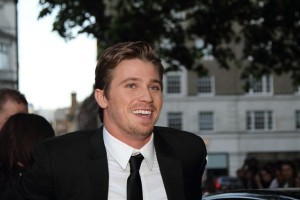 Kelly Ripa said it seemed like Garrett Hedlund came out of nowhere. But he is from Minnesota, and he moved at age 14 to Arizona. At 18, he moved to LA and found work.

He studied film in school, but he wasn’t involved in theater or school plays. He spent his time at bookstores reading Hollywood trade magazines to find contact information for people he could get in touch with. “Does that work?” Kelly Ripa asked. “No,” Garrett Hedlund said.

Kelly Ripa brought up the Oscar buzz for Country Strong. It was written and directed by Shana Feste, and it is her second film.

Garrett Hedlund said he was proud of Shana Feste and excited to work with Gwyneth Paltrow. Neil Patrick Harris said Gwyneth Paltrow is having a career resurgence.

His role in Country Strong also reunited Garrett Hedlund with Tim McGraw, with whom he worked in the 2004 movie version of Friday Night Lights.