Kevin Costner, Hatfields & McCoys producer and star, is well-known as an award-winning actor and  director, but as he walked out to join Seth and Kelly, one of his own songs was playing.

“I didn’t know you could sing!” Kelly asked, when she found out it was his song. He joked, “maybe I can, maybe I can’t.” Kevin revealed that he got back into making music about seven years ago, and has been playing all over the world. The name of his band is Modern West, and they have been doing a lot of touring. They even wrote the theme song for Hatfields & McCoys. 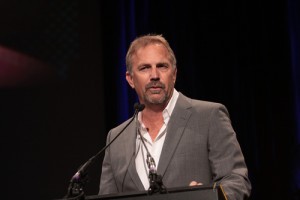 The topic turned to a more serious matter, the untimely Death Of Whitney Houston just a few months ago. Kevin Costner is of course well known for starring alongside Whitney in the hugely popular movie, The Bodyguard. He delivered the eulogy at her funeral, and Kelly wanted to know how long it took to prepare. He said that he did not know what he was going to say after Dionne Warwick called and asked him to speak, but he wanted to do it. He wrote it for a very long time– on the plane, in the car– but he just tried to write what he knew. Kelly said that people were very moved by his words and that everyone felt such a connection to them after The Bodyguard.

Kevin lightened the mood by revealing that the last time he saw Seth, he was trying to start a fight in Madison Square Garden. “I was not trying to start a fight!” Seth said. It was during a Knicks game at the Garden, and Kevin and Seth were sitting next to each other. Kevin said that Seth kept standing up and threatening a bunch of big guys from across the court.

Kevin both produced and stars in the upcoming History Channel mini-series Hatfields & McCoys. Kevin plays Devil Anse Hatfield, and Bill Paxton plays Randolph McCoy. The story is based on a real one, of a famous feud between two families living in the West Virginia-Kentucky back country. It lasted about six years and resulted in many deaths.

He said that it is a very American story of guns and violence, and that it was highly sensationalized by the rise of newspapers at the time. Kelly called it the “ultimate American feud.”

Although the story takes place in West Virginia and Kentucky, Kevin revealed that the filming was actually done in Transylvania, Romania. They were there for a couple of months so he experienced three full moons.

He said that he didn’t see anything too strange, but the spookiness of the whole situation was not lost on him. He also said that the real joy of making movies is being able to travel the world.

Kevin, Kelly and Seth watched a clip from Hatfields & McCoys, in which McCoy confronts Hatfield outside of his house. It ended with Hatfield pointing a gun at McCoy, and Kelly wanted to know, “do you shoot him?”

The miniseries premieres on the History Channel on Memorial Day, Monday, May 28 2012 at 9 PM.