James Marsden has worked on five different films since February, according to Kelly Ripa. “I’ve been busy,” he said. “It’s been exceptional this year.” Some of his shoots are a week long, and some of them are two months, he explained, mentioning that he is currently working on a film in New York called Bachelorette with Kirsten Dunst.

Kelly Ripa said she read about that in a magazine and misunderstood the article, thinking that James Marsden might be going to reality TV as the new Bachelor. Andy Cohen said that could be an interesting twist for the reality show. 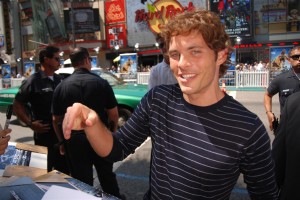 James Marsden went to New York Fashion Week for the first time. He said he was surprised by how short the show was. He said he watched the Tommy Hilfiger show and it lasted about 11 minutes, but it was fun. He was also celebrating an upcoming birthday. Though his family is in Los Angeles, his mom planned to fly in and celebrate with him.

In the film Straw Dogs, James Marsden plays a screenwriter husband married to a character played by Kate Bosworth. They move back to her hometown in Blackwater, Mississippi. There, the wife runs into her ex-boyfriend, played by True Blood actor Alexander Skarsgard.

Today’s Watch To Win Keyword is “parasail.” To win a Hawaiian vacation to the Disney Aulani resort and tickets to attend on location tapings of Live With Kelly, visit livewithkelly.tv and enter the contest using the keyword of the day.

Five lucky winners will receive a trip for four to Disney’s new resort in Hawaii in February 2012.