Last night, Green Bay Packers Wide Receiver Donald Driver became the third football player to win “Dancing with the Stars,” when he and his partner, Peta Murgatroyd, triumphed over William Levy and Katherine Jenkins to nab the Mirror Ball trophy. They came out dancing and holding their trophy high, clearly thrilled over their victory.

When Donald and Peta sat down with Seth and Kelly, Donald revealed that the Mirror Ball Trophy is actually heavier than the Lombardi Trophy. He then criticized the way that Seth was holding it, nervous that he might drop it. He only wanted Kelly to hold it. 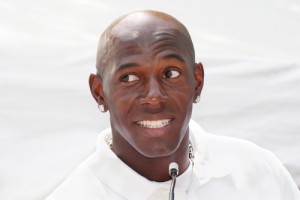 Donald Driver, with Petra Murgatroyd, became the Champion of "Dancing with the Stars".

Kelly asked, “which one tastes sweeter: the Mirror Ball or the Super Bowl?” Donald couldn’t choose, saying that they are both equally sweet. He named dropped some of his fellow football players– like Clay Matthews and James Jones– who are going to be jealous, because they are too chicken to go on “Dancing with the Stars.” Donald also said that previous winner Emmitt Smith, another football player, was pretty jealous of him last night. One of the judges, Len, told Donald that he was the best athlete dancer they had ever had on the show.There are rumors that an All Star “Dancing with the Stars” season is in the works, but Donald said that he would not participate; ten weeks of dancing is enough.

Peta noted how pleased she was to have won this season, which was only her second season the show. It’s especially nice since last season, when she danced with LA Laker Ron Artest, she was the first to be eliminated. Seth joked that Ron, who famously changed his name to ‘Metta World Peace’ recently, had to change his name because his experience with Peta was so bad.

Kelly thanked Donald for taking off his shirt while dancing last night, and showed a clip from the show. Seth became jealous of what great shape Donald is in, and grabbed the Mirror Ball trophy and started spinning it.

Donald and Peta then took the stage to dance a smooth and sexy cha-cha. After they were finished, Kelly said that it was so good, she and Seth started bumping and grinding while they watched. “It got out of control,” Seth agreed.

Afterwards, Donald and Peta decided to give Seth and Kelly a dance lesson, demonstrating some of their moves. The first steps that they performed, however, were so sophisticated– with lifting and spinning– that there was no way Seth and Kelly could emulate them. Instead, Seth and Kelly asked for something a bit more basic. Donald and Peta toned it down, but not by much, although Kelly and Seth did try it. They were awkward at first, but sort of got the hang of it, eventually– they even did a dip!

This success caused Seth to run off into the audience screaming, “I’m gonna be a dancer!” Not quite yet, Seth!