Chris Hemsworth is an Australian actor who has recently scored a string of hits in the United States, quickly becoming one of Hollywood’s biggest new stars. Chris joined Kelly and Mike to talk about his new film, Snow White and the Huntsman, as well as recent successes and becoming a dad for the first time.

When Chris joined Mike and Kelly, Mike could hardly believe that, in addition to being so good-looking, Chris had a deep, Australian-accented voice– just one more thing to make Mike jealous! The first topic brought up was Chris’s new baby daughter, India, who is just a few weeks old.

She is back at home in the UK with her mom, Chris’s wife Elsa Pataky, a Spanish actress. Elsa has been speaking her native Spanish to the baby, but Chris said the only Spanish he knows is “hola.” Kelly suggested that he and the baby learn together.

Chris has really been missing India while he’s doing his press tour in America, and admitted that he feels a bit guilty for leaving her. Kelly joked, “Let me tell you from experience– the baby won’t remember.” 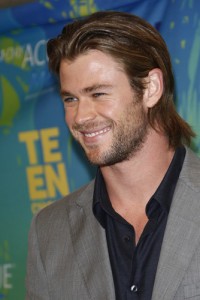 New dad & blockbuster movie star Chris Hemsworth talked about his roles in The Avengers and Snow White and the Huntsman. (Helga Esteb / Shutterstock.com)

Chris Hemsworth: The Avengers and Thor 2

Born in Melbourne but raised in many different areas in Australia, Chris got his start on the long-running Australian soap opera Home & Away.

His real big break came when he was cast as the Nordic god of thunder, first in Thor and now in the blockbuster The Avengers, which has been shattering box office records left and right.

Chris said that he did expect the film to do well, since Thor, Iron Man, and Captain America were all great successes, but he had no idea how huge it would actually be. He is now getting ready to film Thor 2, so he will start working out and eating lots of protein in order to bulk up like the demi-god once again.

His trainer is Duffy Gaver, who worked with Brad Pitt when he had to play Ancient Greek hero Achilles in Troy. Duffy Gaver also trained many of the other Avengers. Chris revealed that he usually has to do most of his own stunts, because unlike other characters like Iron Man or the Hulk, there is no concealing his face from the camera. This means that he is constantly swinging from ropes or being thrown against trees. Sounds like fun!

Snow White and the Huntsman is the highly anticipated re-imagining of the traditional fairy tale, and the film is released today. Chris is the Huntsman in the epic story, and the film also stars Charlize Theron as the evil Queen Ravenna, and Kristen Stewart, as Snow White.

Chris talked about getting punched in the face by Kristen during one scene, even admitting that he had to hold back a few tears. With each take her fist would get closer and closer, until finally, she hit him square in the nose. Mike wondered if the punch put him into “Thor mode.” Chris replied, “no, I didn’t have the hammer!”

Mike, Kelly and Chris set up a clip in which Queen Ravenna orders the Huntsman to find Snow White in the forest. Chris said that, because of the scheduling with The Avengers, he didn’t have any rehearsal time. So when he had to do his first scene, which was with Charlize, he was extra intimidated by her. Maybe the thousand pointy swords being aimed at him had something to do with his nerves, as well.

Snow White and the Huntsman is out in theaters June 1 2012.