Bill Paxton came out to join Kelly and Seth proclaiming, “the smoking lamp is lit!” This phrase got some big cheers from the audience, so it must be a military inside joke. But Bill wasn’t actually in the military– he said he just played a military man on TV.

The first topic that came up was Bill and the wreck of the Titanic. Of course, Bill starred in the 1997 blockbuster Titanic film, so he has a special relationship to the ship. He said that he has been to the wreck four times now, and it’s like living Jules Vern’s novel, 20,000 Leagues Under the Sea. James Cameron, Titanic’s director, invited Bill to join him on an expedition about five years after they made the movie together. Bill was excited to go, but he called up Lloyds of London to see if they would insure him, and they said no way. 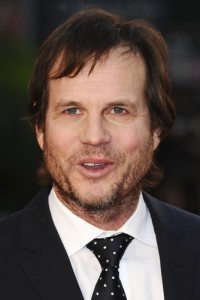 Bill Paxton visited Live with Kelly to talk about his role in the Hatfields & McCoys miniseries and a historical encounter with JFK. (Featureflash / Shutterstock.com)

Kelly brought up that Kevin Costner, Bill’s Hatfields & McCoys co-star, also starred in the movie JFK; this is another connection that Bill and Kevin have, because although Bill was not in the same film, he got to witness real life history.

When he was eight years old, on November 22, 1963, his brother Bob woke his father up and made him take his sons to go and see the President, who was visiting. Of course, this is the infamous day when John F. Kennedy was assassinated. In photographs from that day, you can clearly see Bill, sitting atop his father’s shoulders, peering out from the crowd. Bill said that “none of us knew that the world was about to change.” Seth said that this photograph made the pictures of himself and Kelly on vacation seem pretty unimpressive.

Yesterday, Kelly and Seth chatted with Bill’s Hatfields & McCoys co-star, Kevin Costner. Bill discussed his involvement with the film, and said that he was very flattered when Kevin (who also acted as Producer) offered him the role of Randolph McCoy. He was surprised, though, that the mini-series would be shooting in Transylvania. He said he felt like he was making a “vampire western.”

Bill brought lots of pictures of his time spent in Transylvania to show Seth and Kelly. There was a picture of a group of school children outside of a castle, which Seth joked was “Hogwarts for vampires.” One picture showed an undeniably eerie deserted and foggy road. Bill said that it was like going back in time 200 years; there were ox-carts and horses collecting wood. There was also a picture of Bill smiling in the makeup chair with painted yellow teeth. Bill said that the job was so much fun, because he got to be gross and dirty all day with a long beard.

He also mentioned that all of the other actors were afraid of Kevin Costner, because Kevin knew every single line by the time he got onto the set. Every time he saw someone, he would want to run lines with them. When everyone saw him coming, they ran! Bill also revealed that he drank a lot of moonshine.

The miniseries Hatfields & McCoys premieres on the History Channel on Memorial Day, Monday, May 28 2012 at 9 PM.