Mary Lou was the first woman to share her story with Kelly & Michael on Live, and get ready, because it’s an emotional one! The mother of four and self-proclaimed “simple farm wife” was nominated by her oldest daughter, Kelly. “I guarantee you’ve never met anyone as special as my mom,” Kelly explained. 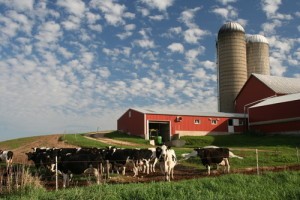 Mary Lou and her husband, Neil, have been married for almost 25 years. Mary Lou and Neil’s youngest daughter, Candy, is 14 and mentally handicapped. Candy can’t walk, speak or feed herself, but she’s just as much a beloved member of the family as anyone else. In addition to her many farm duties, it’s Mary Lou’s job to feed and care for Candy around the clock.

By 8:30 am, Mary Lou has already worked harder than most of us will throughout our entire day. After waking up at 4:30 am, Mary Lou changes Candy’s diaper, grabs a quick cup of coffee and heads outside to milk the cows. Milking the 120 cows is a two-and-a-half hour process, after which Mary Lou comes inside, prepares breakfast for the family and readies Candy for her day.

Kelly and Michael spoke with Mary Lou at Live and couldn’t believe that she’s almost 50-years-old. Obviously, grueling farm work does a body good, because Mary Lou could pass for 30. Mary Lou explained that she and her husband were hoping to take a cruise for their upcoming anniversary, which would be their first time leaving the country. However, they hadn’t made any plans yet.

Of course, Kelly & Michael had to reward Mary Lou for her dedication in being an unstoppable mom. In addition to a pretty snazzy trophy, Mary Lou was given a seven day Norwegian Cruise to celebrate with her husband.

Tune in all this week for more Unstoppable Mom stories.