Actress Susan Sarandon may look like a mild-mannered woman, but she’s fighting for rights all over the place. She was named a UNICEF Goodwill Ambassador in 1999 and works with organizations fighting hunger and aiding HIV/AIDS research. This week, Sarandon threw her hat in the ring in the legalization of marijuana debate. She said in an interview with HuffPost Live that making weed illegal is “racist” and “a waste of money.”

“I believe in individual rights,” she said. “I mean, I would like to see everyone be able to smoke pot.” 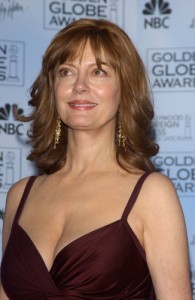 Susan Sarandon is standing up for human rights and wants to legalize marijuana. Her new film, The Big Wedding, comes out April 26. (Featureflash / Shutterstock.com)

The actress went on to say that being high is much better than being drunk. She said that you never see people robbing stores or driving when they are too high. She thinks that alcohol causes more problems.

Late, Sarandon brought her dogs with her to Good Morning America to promote her new film, The Big Wedding. We’re learning so many new things about the actress. First she’s fighting for marijuana, now she’s bringing back Paris Hilton’s dog accessory trend.

The Big Wedding is a star-studded affair. Amanda Seyfried (Les Miserables) is marrying Ben Barnes (The Chronicles of Narnia). Their families are dysfunctional and unintentionally ruin the day. Diane Keaton, Katherine Heigl, Robert De Niro and Topher Grace also star in the film. Robin Williams plays Father Moinighan, bringing back memories of his erratic reverend character from License To Wed.

Cher Lloyd performed her new single “With Ur Love.” Lloyd released the song in 2011 in the U.K. with a special cameo from Mike Posner. The new single has been remixed for 2013 and just features Lloyd.

It’s a catchy song that runs the risk of getting overplayed this summer. Lloyd’s first single in the U.S., “Want U Back,” was not as easy to listen to. She had a strange grunt that she added into the track that broke up the flow of the song.

Lloyd was a contestant on the U.K. XFactor and came in fourth place in her season. Her album Sitcks & Stones came out in the U.S. in October 2012.