Kelly & Michael spoke with movie star and former Sexiest Man Alive, Ryan Reynolds. As a former champion, Kelly wondered if Ryan had any advice for a potential Sexiest Man Alive candidate like Michael. Ryan suggested stripping down on camera. “Take your shirt off, pants off,” he said. Also, “wining and dining” the editor at People doesn’t hurt, either. 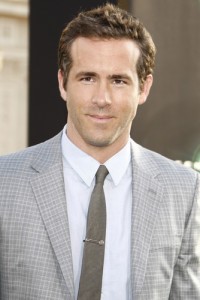 Ryan Reynolds married actress Blake Lively in September 2012. The notoriously press-shy couple don’t usually acknowledge their relationship in interviews, but Ryan accepted a heartfelt “congratulations” from Kelly & Michael. He also admitted that he’s definitely “happily married.” Kelly suggested that he and Blake could be named Sexiest Couple Alive. “I hope they don’t do that on the cover of a magazine,” Ryan said.

Since it’s Unstoppable Mom week at Live, Ryan shared information on his own Unstoppable Mom. Ryan expressed nothing but admiration for his mom, who raised four sons in a “testosterone-fueled” house. Ryan is the youngest which practically makes him “the daughter.”

With St. Patrick’s Day coming up, Ryan admitted that he doesn’t have any big plans. Even though he’s Irish, he’s not a big drinker. His first experience with alcohol was when his older brother, Patrick, gave him Kahlua. Maybe that explains why!

Next was a game of “Ry-In or Ry-Out” with the hosts. Unfortunately, this is just an old game recycled from an interview with Ryan Seacrest. Here’s what we learned about this other famous Ryan:

Ryan Reynolds: Guy In The Croods

Ryan’s new animated film, The Croods, is “the first family road trip” movie. The plot follows a prehistoric family on a journey outside of their cave, where the eventually meet with Guy, Ryan’s character. Guy falls for the oldest daughter, played by Emma Stone.

Ryan loved the process of making an animated film. It’s “the best job in the world” because you get to wear whatever you want. The process takes about 2 1/2 years, and the cast usually works from all corners of the world. However, he and Emma did film one scene together.

Emma Stone will be a guest on Monday, March 18 2013. Kelly & Michael wondered if Ryan had any “secrets to divulge” about her. “She has eyes the size of actual dinner plates,” he joked. But we knew that already! Check out Ryan Reynolds’ new movie, The Croods, in theaters March 22 2013.