Lisa Vanderpump: Dancing With the Stars

Live! with Kelly & Michael welcomed Dancing with the Stars contestant Lisa Vanderpump and her partner, Gleb Savchenko. Lisa is known as the outspoken star of Real Housewives of Beverly Hills, while Gleb is a professional ballroom dancer known for his appearances on the Australian version of Dancing with the Stars. Lisa and Gleb took some time out of rehearsing for the show to chat with the hosts and show off their moves on the dance floor.

Recently on Dancing with the Stars, Lisa and Gleb found themselves in danger of going home. However, after Wynonna Judd and partner Tony Dovolani were eliminated, Lisa and Gleb have lived to dance another week. 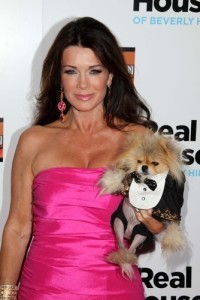 Lisa and Gleb performed a romantic rendition of the Viennese Waltz. They danced to the song “I Have Nothing” by Whitney Houston. Lisa performed the waltz with no shoes on, and later revealed she hadn’t gotten any sleep, either!

Later, Michael asked Lisa if any of the other housewives are jealous of Lisa’s Dancing with the Stars appearance. “Have you seen my show?” she joked. Lisa also stars on Vanderpump Rules, a spin-off about her restaurant.

Although she’s currently a reality show tycoon, Lisa admitted that she’s a “hot mess” on Dancing with the Stars.

Lisa had the chance to hand-select Gleb, her partner, and the two make a very nice couple on the dance floor. Gleb called working with Lisa “a dream come true.” The only snag is Lisa’s busy work schedule, which means they have to practice within tough time constraints.

When asked who Lisa’s biggest competition is, she replied, “All of them!” She did single out Kellie Pickler, however. Despite the competitive nature of the show, though, Lisa said that there’s a great comraderie between the dancers. She just didn’t realize how challenging the show would actually be.

See Lisa and Gleb on Dancing with the Stars, airing Mondays at 8 p.m. and Tuesdays at 9 p.m. on ABC.