Carl Edwards, the NASCAR Champ known for his backflips in addition to his many titles, stopped by Live! with Kelly & Michael for a chat. Carl was fresh off a race in Richmond, VA where he placed sixth. He recently won the Subway Fresh Fit 500, which means he is second in the points. Carl called it “a huge accomplishment.” 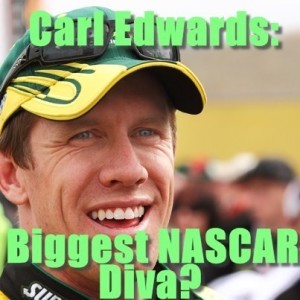 Kelly said that NASCAR is “like a soap opera.” Carl agreed that emotions run high during races, and every week guys get more and more amped up. It’s hard to express frustration from inside a car so sometimes they’ll throw helmets at each other or at their cars. It’s like road rage times 1,000!

Michael asked Carl, “who’s the biggest NASCAR diva?” Carl had to think for a second, but in the end, his answer was pretty diplomatic. “I’d say there’s a little bit of diva in all of us,” he said. In fact, he admitted that sometimes he’s the biggest diva of them all.

Since it’s Top Teacher Week on Live! with Kelly & Michael, Kelly wondered if Carl had a teacher who inspired him above all others. Carl said that Mrs. Dodge, his kindergarten teacher, had a huge impact on him – literally! He remembers sitting in her office with his mom and discussing corporal punishment. He thought he was going to get off easy, until his mom told Mrs. Dodge, “You don’t need to call me, spank him whenever he needs it!”

That’s why Carl sweats every time he sees a teacher, even to this day. As Kelly pointed out, that was the main difference between school now and then. Kids today have it easy.

Speaking of school, Carl recently drove a high school student, Christopher Wooten, to class in his race car. The event was part of a contest that Christopher won, which meant he got to don a racing suit and ride shotgun with a NASCAR champ. Carl said that Christopher is a really great kid, and it was a cool experience.

You can catch Carl Edwards racing at Talladega this weekend, or just hear his voice announcing races for his new gig at ESPN.