Who knew that Wife Carrying was an actual sport? Despite its seemingly ridiculous premise, the North American Wife Carrying Championships are held each year on Columbus Day weekend. They may not be husband and wife, but Kelly and Michael decided that they just had to get in on the fun! 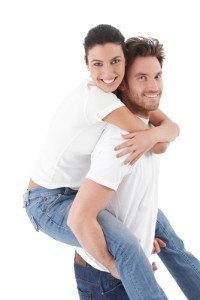 The hosts slapped on their workout gear and prepared to go head-to-head with the four-time Wife Carrying champions, Taisto and Kristina from Finland. Taisto explained that he began training for Wife Carrying after seeing the competition on TV.

The couple have won four times, which means that they’ve won Kristina’s weight in beer and five times her weight in cash (which isn’t that much– she’s very tiny). They’ve always shared the beer with their competitors, but they don’t share their cash!

Before heading outside to begin the competition, Kristina and Taisto demonstrated some of the common Wife Carrying techniques. They prefer “the Estonian,” which features the woman hanging upside down on the man’s back. The other techniques are the classic “Piggy Back,” and over-the-shoulder “Fireman” style.

The Wife Carrying Competition was held outside of the studio, and honestly, it was one of the funniest events in Live history! Kelly & Michael chose to try out the classic Piggy Back style, which probably slowed them down. Taisto and Kristina were out of the gate like race horses! They were so fast, and Kelly & Michael simply could not keep up.

The hosts had a tough time navigating the obstacle course–especially the slide. Michael even lost a shoe! See for yourself.

Needless to say, Taisto & Kristina once again found themselves victorious. But Kelly & Michael were proud of a good effort.

“I lost a shoe, I lost my wind, I almost lost my life!” Michael said.