One of the biggest men in Hollywood, Vince Vaughn, stopped by on Kelly and Michael June 5 2013 but he wasn’t always the tallest kid in class. He said he was around average height for most of his life until his junior year when he grew about six or seven inches in a year.

“Then you’re trying to figure out how do I move my arms,” said Vaughn of his growth spurt.

He did play football but he was only average. He said everyone was so much bigger and faster than he was that he had to turn to comedy to make friends.

Vince Vaughn’s daughter, Locklyn, is turning 3 soon and he is really excited to be able to play with her more. He said when she was young there wasn’t much he could do with her since she was a baby but he says not that she is getting older they can finally communicate and have fun. 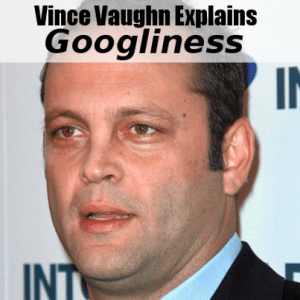 Vince Vaughn stopped by Live! to talk about his daughter turning 3, his role in Anchorman 2 and what it was like filming The Internship at Google.
(s_bukley / Shutterstock.com)

When Kelly Ripa pointed out that her children love Vince Vaughn movies,Vaughn wasn’t too sure his daughter would be as excited.

“She’ll probably want to get away from me at that point,” he said.

Vince Vaughn’s wife is pregnant with their second child but he said they do not know the gender of the child yet. His wife wants to it a secret to make it more of a surprise and he seemed to agree with her.

When Kelly Ripa asked Vaughn if he is going to be in the new Anchorman movie, he said he might just be.

“There are some photos floating around of me in a leather suit next to Will Ferrell as Ron Burgundy, so…,” he joked.

Vince Vaughn, who wrote the first draft of The Internship, said he wanted to make another movie with Owen Wilson but he didn’t want to make a sequel to Wedding Crashers, adding that he feels like sometimes sequels are made just to be made and not made to be good movies.

“People really like the new movie and it has a lot of heart,” said Vaughn of The Internship.

While filming for the movie, they shot a few of the scenes at Google headquarters which Vaughn liked to a Club Med. He commented that there must be someone working since the stock is going up but you would never know it.

Vaughn said the movie is about everyone’s pursuit of Googliness, which he defined as this intangible thing that drives people to to not give up on their dreams and to persevere through difficult times.

“My Googlie level, depending on the time of day, can range from high to moderate,” said Vaughn.