Although she is now retired, Tyra Banks is one of the best runway models ever, from the highest of high fashion in Paris to strutting her stuff in Victoria’s Secret lingerie. Tyra came out to join Kelly & Michael September 14 and showed why she can still rock the runway! Tyra met with the hosts to talk about America’s Next Top Model, her own supermodel lingo, and why her self-proclaimed “giant” forehead sent her to the hospital when she was a kid. 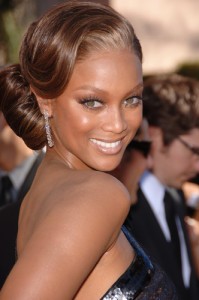 Since it’s Cutest Kid Search Week at Live, Kelly asked Tyra, “were you always a beautiful child?” Tyra said that she was very cute and chubby as a kid, but once she turned eleven, things started to go down hill. She had a growth spurt, growing three inches, and lost thirty pounds. No matter what she did, she could not gain weight. She even visited many doctors, who thought that something was seriously wrong with her.

One doctor actually diagnosed Tyra with gigantism. He believed that her forehead was so big because it was growing at a more rapid rate than the rest of her. Turns out, Tyra wasn’t sick; she was just destined to be a supermodel!

On America’s Next Top Model, Tyra has used many words and phrases to describe modeling techniques that have since become famous. The best example is “smeyes,” which means to smile with your eyes. Another one that non-models may not understand is “ugly pretty.” As Tyra explained, in the modeling world, conventionally pretty is sometimes considered boring. “Ugly pretty” is a style of posing that is pretty with a bit of an edge.

Tyra demonstrated “pretty pretty” vs. “ugly pretty” for Kelly & Michael. Then, the hosts themselves gave it a try. However, Kelly had to cut her modeling demonstration short when her “botox cracked.”

America’s Next Top Model is now in its nineteenth cycle on the CW. One new aspect of the show is that fans are now 25% of the vote. When the photos of the aspiring models are critiqued at the judging panel, the judges also play fan videos that judge the photos as well.

However, since the fans now get a say, that means some girls get sent home without Tyra’s approval. When one of her particular favorites was sent packing this season, Tyra cried on camera. However, she held it in as best she could with her “deep inhale” technique. The next time you feel like crying, Tyra suggests sucking it in by breathing deeply; it works for her!

Tyra wanted to explain the real reason she started America’s Next Top Model, which was not simply to have a modeling competition on TV. Through the show, Tyra wishes to expand the definition of beauty. For her, it was having a big forehead. For someone else, it could be being plus sized, having frizzy hair, or having dark or pale skin. Whatever traits we may have that make us feel odd or different, Tyra hopes that we can still always feel beautiful.