After an exciting season of The Bachelor, Sean Lowe has given away his final rose. Last night, Catherine Giudici became Sean Lowe’s fiancee in the dramatic conclusion of the hit ABC dating series. The newly engaged couple sat down for an interview with Kelly Ripa and Michael Strahan, covering topics such as their grand exit from the show and how they hid their relationship from the media for months. 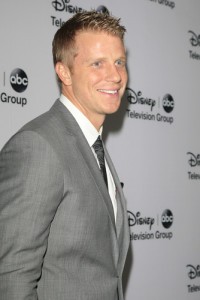 During the proposal, Catherine seemed very much in shock. She described the moment as “very overwhelming and emotional.” I’m sure having cameras in the couple’s faces didn’t help, either. After Catherine said “yes,” she and Sean made a very dramatic exit while riding an elephant. Kelly was bummed to have missed it.

It’s been months since the finale was taped, so since that time, Sean and Catherine were forced to meet in secret. Sean explained that ABC provided a house for them to get together during weekends while he was living in Dallas and she was in Seattle. It was like the “Witness Protection Program” for reality stars.

Sean Lowe: Dancing With the Stars

Sean also announced that he’s competing on the next season of Dancing with the Stars. He’s partnered with Peta Murgatroyd, a former winner, so he’s feeling good about his chances. New fiancee Catherine will be cheering from the stands each week.

Finally, the newly engaged couple played a game of “Bachelor Paddles Tell All,” and revealed some hidden facts about each other. “If you don’t win this competition, you have to call off your engagement,” Kelly warned. We learned that Catherine is most likely to leave dirty towels on the floor and the cover off the toothpaste, while Sean is most likely to do laundry and go skinny dipping. Looks like they can get married, after all.