Sting met Michael Strahan in a restaurant. He bumped into his chair and Michael stood up and he was intimidated. 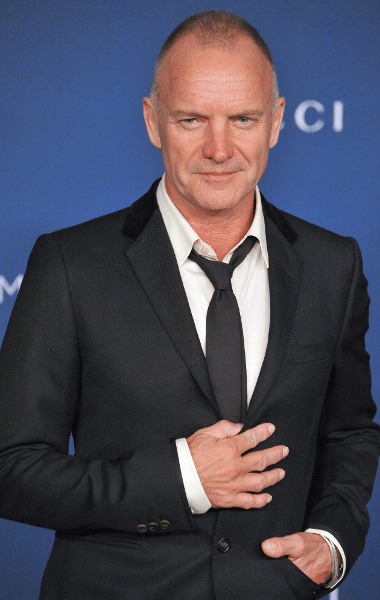 Sting came by to talk about ‘The Last Ship’ and perform “What Say You Meg.” (Jaguar PS / Shutterstock.com)

Sting just received the Kennedy Center Honors. Stephen Colbert hosted it. He couldn’t remember it much, but it was weird to be praised for two days. Meryl Steep spoke about him because they made a movie called Plenty together.

He has six children. Four of them went to the event. His younger daughter had a gig and his younger son had finals. He also has grandchildren. He never thought he’d be a grandfather, but he loves it. And he has two more on the way.

His only nights off are Christmas and New Year’s Day with The Last Ship. He’s going to rest and be with his children. They were going to go to the Caribbean, but the canceled so he could do the show.

Following The Last Ship, Sting is going on tour with Paul Simon, which is exciting. They’ve toured before. He’s his mentor and they lived in the same building for a while. Kelly asked what the weirdest thing he borrowed from Sting was, and he joked it was songs.

The Last Ship is about shipyard workers. Sting grew up by a shipyard. They showed a picture. He didn’t want to work there, so he did everything he could to escape, but now he’s going back there to find his inspiration. It’s also a complex love story.

He composed the music, and now he’s in it. He only had two days of rehearsal. He was pretty overwhelmed and just tried not to get in the way. He wasn’t terrified though, because he saw every rehearsal and performance, but being on the stage was different. He still has to think about what he’s doing.

They also released the cast album, including a bonus track from Sting, which is very exciting.

Sting performed “What Say You Meg” from The Last Ship. He did a really good job. It was a really pretty song about growing up and how he’d dream about his future and being with a certain girl. I really liked it. It was just a really beautiful, sweet song. Kelly said it was gorgeous.