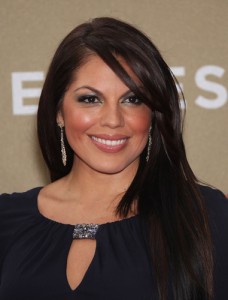 Grey’s Anatomy star Sara Ramirez shared details of her proposal and wedding to longtime boyfriend Ryan Debolt when she joined Kelly & Michael. Sara was on vacation with Ryan in Paris when he proposed, and it was very unexpected. The couple had been together for a very long time, and since Sara comes from a divorced family, she felt very cautious toward marriage. However, when Ryan planned a tour of the city that ended with a proposal at the Eiffel Tower, Sara was thrilled.

The couple were married on the Fourth of July, and no, not just for the fireworks! They had been planning on spending that time seeing friends anyway, so a beach wedding on the Fourth just seemed perfect. Sara is a very happy newlywed, and even got Michael to gush over her story!

The popular ABC medical drama Grey’s Anatomy is about to begin its ninth season, and Callie is returning to her role as Dr. Callie Torres. Last season ended with a major cliffhanger in the form of a plane crash, and while Callie wasn’t on the plane, many of the people that she cares about were. All Sara could reveal is that the crash “affects” Callie. Also, the new season will flash-forward to three months after the crash, where there are a lot of changes at Seattle Grace: Dr Mark Sloane is leaving, and Callie finds herself bonding with Derek. Grey’s Anatomy season nine premieres September 27 2012 on ABC.

Sara Ramirez: “Sophia The First: Once Upon A Princess”

Sara is also lending her voice to an adorable new TV special. She voices Sophia, a Disney princess, on Sophia the First: Once Upon a Princess. The animated special airs November 18 2012 on the Disney Channel.