American Idol host Ryan Seacrest also stopped by Live! With Kelly & Michael, right after AI judge Mariah Carey’s interview. “I drive Mariah Carey,” he jokingly explained, which is why the duo travels together.

Ryan was fresh off the red carpet at the Academy Awards, where he appears annually for the E! Network. It was Michael’s first time, but of course, Ryan is an old pro. They ran into each other while interviewing the stars, which made Michael nervous because Ryan was so calm, cool and collected. However, I think Michael did a great job, especially for a newbie. 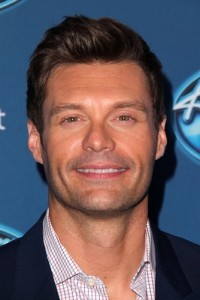 Ryan Seacrest discussed the Idol Across America event and played a game of “Ry-In or Ry-Out.” (s_bukley / Shutterstock.com)

Ryan was very happy that he got everyone’s name right while doing interviews. Other highlights from the night included the fashion, such as “backward necklaces” and “light-colored dresses.” His words, not mine! Who knew Ryan was such a fashionisto?

Ryan’s new hair, which he debuted at the Academy Awards, has since caused quite a stir. It’s sort of a new take on the pompadour. “My license says I’m 5’9,” and now, I’m 5’9,” Ryan explained. His girlfriend, Julianne Hough (who once rocked a very similar style) is the one who told him to grow his hair.

However, there’s another celebrity that Ryan shares an uncanny resemblance with in the hair department: Cameron Diaz in There’s Something About Mary.

Ryan discussed Idol Across America, a cool new event that’s similar in style to the passing of the Olympic torch. Instead of a torch, however, they’ll be using a microphone, which will travel across 13 cities and then be passed on to the American Idol winner. Pretty cool!

Finally, it was time for a quick game of “Ry-In or Ry-Out,” in which Ryan described whether or not he likes a particular activity. Basically, it was just an excuse for Ryan to come up with some fresh new puns.