Kelly & Michael welcomed award-winning actress and star of the ABC sitcom The Middle, Patricia Heaton. Patricia has appeared on the show many times, but it was her first time meeting new co-host Michael Strahan. The two learned that they both have a love of football in common; Patricia was raised in Cleveland, Ohio and her father was a sports writer for fifty years. Her dad is now in the Football Hall of Fame for writing.

Unfortunately, the Cleveland Browns haven’t won a Championship since 1964, but Patricia is still a devoted fan. She also has many great memories from her childhood surrounding football. 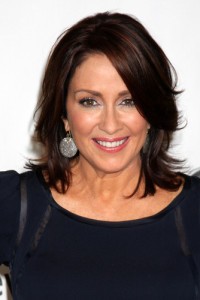 Patricia said that she’d like to spend more time in New York and potentially do theater someday, but right now she’s too busy with her four teenage sons. They are 19, 17, 15 and 13. Kelly, a mom of three, said that four boys seems like way more work. However, Patricia said that having four boys is actually easier than having just one girl.

Patricia will sometimes lose track of her four sons and important events like birthdays. Once she was reminded of her son’s birthday via a Twitter follower!

Patricia and her husband, David Hunt, have executive produced a new holiday themed movie for Hallmark called The Christmas Heart. Her brother, Michael Heaton, also wrote the film, so it’s a true family affair. The film tells the story of two mothers losing their sons, and Patricia said that it’s much “deeper” than the average Christmas movie. The Christmas Heart stars actress Teri Polo and Patricia knows that people are going to love it.

The Christmas Heart was shot in Winnipeg, Canada in February, but filming hit a rough patch when they couldn’t find any snow. The filmmakers would drive to different locations searching for snow and then transport it to the set. They also used cornstarch in place of the real thing. Who would have thought, Canada in February with no snow!?