Megan Boone from The Blacklist came by to talk to Kelly Ripa and Michael Strahan. I watched the first season of The Blacklist, and thought she did a really good job, so I was excited to hear more from her. I really liked her dress. 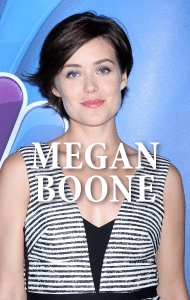 Megan Boone talked to Kelly & Michael about working with James Spader on ‘The Blacklist.’ (s_bukley / Shutterstock.com)

Boone’s not the only celebrity in her family. Her grandmother was the Cherry Queen. They showed some pictures. It was amazing. She even had a bonnet.

Boone’s always very busy. She’s not just an actress, she’s also an artist. Kelly said that she was blown away. They showed some and it was amazing. It’s what she does to unwind. She doesn’t have any training, but she’s done it forever. She clearly has a gift, even though she doesn’t take it so seriously. It’s good for gifting, but would not be a great backup plan. She always gives her art away. She loves the show, so she made Kelly & Michael some art. It was nice of her. Kelly gave her hand sanitizer and a box of tissues.

In the clip of The Blacklist, Lizzie Keen was talking to Red about how Berlin killed people and how she wants to kill him rather than have him arrested. She works with James Spader, whom I love. They have great chemistry. Boone said that Kelly & Michael know about great chemistry.

The idea of James Spader is intimidating, but he’s not creepy. He was so charming and nice as soon as they met. Boone knows him from all of his earlier roles and John Hughes movies. They were very important to her when she was young. She was hesitant to approach him about it, but he loves compliments, so it all worked out. He’s really normal and isn’t what people think.

Will we ever find out if he’s her father? Once we find out, the show will pretty much be over. So to wish to know is to wish that the show will be over. So we all have to want it to still be a secret. That was a cute answer. The Blacklist airs on Mondays on NBC.