Maya Rudolph is an incredibly talented comedienne, which she proved during her run on Saturday Night Live and in countless comedy films such as Bridesmaids. But did you know that Maya is also an amazing singer? Kelly knew, because she worked with Maya when she hosted Saturday Night Live. But Maya actually began her career as a musician. 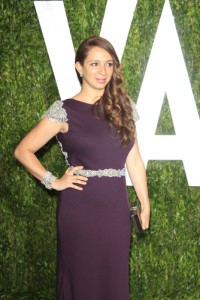 Comedienne and singer Maya Rudolph discussed the new season of “Up All Night” with Kelly & Michael. (Phil Stafford / Shutterstock.com)

Maya’s talents come from her mother, singer Minnie Riperton, who is known for her smash hit song “Lovin’ You.” After college, Maya got a gig touring with The Rentals as a singer and keyboardist.

Now, Maya is in a new band with her friend, Gretchen, and it’s a Prince cover band. The ladies call themselves “Princess.” Maya is a huge Prince fan, and she once met him on an airplane. Prince told Maya that he is a big fan of her mom’s music, and Maya was excited that they got to share the same oxygen.

Kelly & Michael decided to put Maya’s Prince knowledge to the test in a game called “The Prince is Right.” They all sang along together, and Maya knew all of the words to songs such as “Kiss” and “When Doves Cry.”

Maya turned 40 over the summer, and she had a very fun birthday party. She said that with a milestone birthday, “you either hide, or you have a big party,” and she chose the latter! For the occasion, she had a huge dance floor temporarily installed in her home. Her youngest daughter, Lucy, who is three, is still lamenting the loss of “her dance floor.”

Kelly wanted to know, are Maya’s kids talented like their parents (dad is director Paul Thomas Anderson)? Maya said that she has noticed her oldest daughter, Pearl, act a lot like she did when she was young.

Maya Rudolph: “Up All Night” Season 2

Maya’s NBC comedy, Up All Night, is set to premier its second season. The show also stars Christina Applegate and Will Arnett. Maya portrays narcissistic talk show host Ava Alexander, and she revealed that in the first episode, Ava’s show gets cancelled. This leaves Ava struggling to figure out how to navigate the real world, and do things like buy her own coffee.

Don’t miss Maya and the hilarious hijinks on Up All Night when it premieres Thursday, September 20 2012 on NBC.