Matthew Perry spent 10 seasons on the smash hit sitcom Friends, which he followed up with roles in The West Wing and the short-lived sitcom Mr. Sunshine. Now he is returning to the comedy world in the new series Go On, and he hung around with Kelly and Michael to talk all about it.

Backstage, he got to meet US Open winner Andy Murray, and Kelly recalled that Matthew is also a tennis player. Michael asked about his experience throwing the first pitch at a Dodgers game. 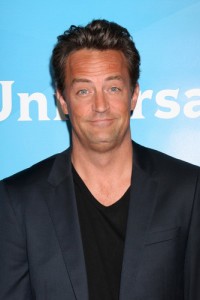 The co-hosts talked with Matthew Perry for a 'Go On' review of his new NBC sitcom about a bereaved sportscaster. Will Michael be on the show? (Helga Esteb / Shutterstock.com)

He said the pressure and chance to obsess about it for weeks made him crack. He got advice to aim high so it wouldn’t bounce. He had a pretty decent throw, according to the video clip, but it did bounce on home plate.

Michael said he threw a first pitch for the Mets and was intimidated by the players staring at him near the dugout.

In other sports news, Matthew attended Peyton Manning’s first Broncos game. He said the Sunday Night Football crew tried to get a shot of him to promote the show, but two guys in front of him blocked the shot every time.

Kelly said she enjoyed the sneak preview episode of Go On that aired last night. The series officially gets going in its regular timeslot tonight, September 11 2012. The sitcom airs Tuesdays at 9 p.m. on NBC.

Perry’s sitcom character is a sports broadcaster, and the show features a variety of cameos by athletes. Michael wanted to know if Perry has personally asked any of the famous guests to do the series.

He said he recently asked Michael Strahan, who agreed to appear. Kelly invited herself to come on as well. In the show, his character is surprised to find community when he is forced to attend bereavement counseling.

In a clip from the series, the character repeatedly comes up with extra work assignments to distract himself from the loss of his wife.

The co-hosts played a fast-paced game with Matthew Perry, asking him questions rapid fire for this Minute of Truth game.

We learned that Matthew loves traveling to Maui and the movie Groundhog Day. But Matthew had trouble being on the spot and stumbled over a few questions.

As for the craziest thing he’s ever done? “In a charity tennis event, I hit Chevy Chase in the private region with a serve,” he admitted.